‘It Could Happen Anytime’: Scientists Warn of Alaska Tsunami Threat

A retreating glacier is increasing the risk of a catastrophic landslide and tsunami within a few decades, researchers say. 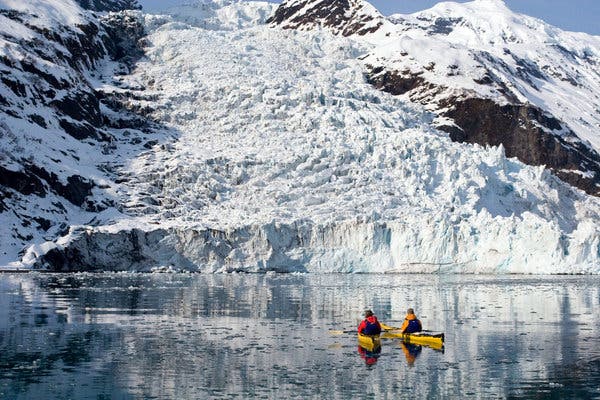 Mr. Fountain is a science writer and the author of “The Great Quake,” about Alaska’s deadly 1964 earthquake.

Climate change has increased the risk of a huge landslide in an Alaskan fjord that could cause a catastrophic tsunami, scientists said Thursday.

Warming temperatures have caused the retreat of a glacier that helps support a steep, mile-long slope along one flank of a fjord in Prince William Sound, about 60 miles east of Anchorage. With only a third of the slope now supported by ice, the scientists said, a landslide could be triggered by an earthquake, prolonged heavy rain or even a heat wave that could cause extensive melting of surface snow.

While the slope has been moving for decades, the researchers estimated that a sudden, huge collapse was possible within a year and likely within two decades. “It could happen anytime, but the risk just goes way up as this glacier recedes,” said Anna Liljedahl, an Alaska-based hydrologist with the Woods Hole Research Center in Massachusetts, who was part of the team.

Alaska’s Department of Natural Resources, after being briefed on the findings, issued a statement Thursday afternoon warning that “an increasingly likely landslide could generate a wave with devastating effects on fishermen and recreationalists.”

Computer modeling showed that a collapse of the entire slope — roughly estimated to be 500 million cubic meters of rock and dirt, or several hundred times the volume of the Hoover Dam — could cause a tsunami that would start out at several hundred feet high.

About 20 minutes later, when it reached Whittier, a town at the head of another narrow fjord 30 miles away, the wall of water could still be 30 feet high and cause extensive destruction.

“As a hazard, it’s really worrisome,” said another researcher, Hig Higman, who studies geological hazards and runs an organization called Ground Truth based in Seldovia, Alaska.

Dr. Liljedahl said that although their findings have yet to be peer reviewed, “we realized we needed to let people know.” She said the researchers hoped that money would be made available for near real-time monitoring of the slope that could provide a warning if a landslide and tsunami occurred.

The fjord, Barry Arm, and other nearby waters are frequently visited by tourist and fishing boats, and the surrounding land is a popular with hunters. In good weather, potentially hundreds of people could be in the area. Although it has a year-round population of only several hundred, Whittier is typically a disembarkation point for thousands of cruise ship passengers headed inland to Anchorage and points north. 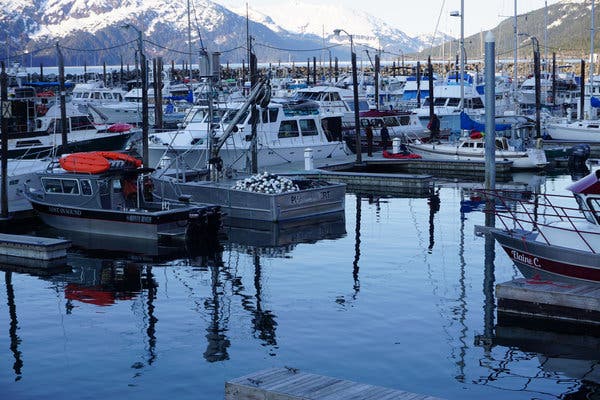 A wall of water could devastate Whittier, Alaska, in the event of a landslide at the Barry Arm Glacier. Credit...Yereth Rosen/Reuters

Tsunami-inducing landslides are rare but have occurred in Alaska and elsewhere. Perhaps the most famous occurred on July 9, 1958, in Lituya Bay on Alaska’s southeast coast, when a nearby earthquake caused 40 million cubic yards of rock to slide 2,000 feet into the narrow bay.

Scouring of vegetation on a hillside opposite the slide showed that the tsunami reached a maximum height of 1,720 feet — essentially a giant splash that is the highest tsunami ever documented. The water then rolled up the bay in a wave that was still about 75 feet high when it reached the mouth, swamping several fishing boats and killing two people.

A slide at Barry Arm would potentially be much bigger in terms of the energy involved. “It’s in a whole different class than we’ve ever even studied after the fact, much less before it happens,” Dr. Higman said.

The researchers, from 14 organizations and institutions — including Ohio State University, the University of Southern California and the Anchorage and Fairbanks campuses of the University of Alaska — only began studying the Barry Arm area about a month ago, as part of a NASA-financed project to study land-mass movement across the North American Arctic.

Dr. Higman was aware of several areas in Alaska that had landslide risk. But it was his sister, Valisa Higman, an artist, who alerted him to the potential hazard at Barry Arm. Aware of her brother’s work, she was on a tourist boat in the arm when she saw the slope, which looked to her as if it had fractures, suggesting that it was slowly sliding. She took some photographs and sent them to her brother.

Dr. Higman studied satellite imagery and determined that the slope had indeed been sliding over time. Additional analysis showed that the rate of movement at times had been high: Between 2009 and 2015, the landslide moved downhill about 600 feet, leaving a large scar.

Chunli Dai, a researcher at Ohio State, showed a connection between the sliding and the movement of the nearby Barry Glacier, which, like glaciers all over the world, has been melting and retreating as the climate warms.

The researchers say that permafrost, or permanently frozen ground, may exist in the area and may be helping to keep the slope stable. Climate change has also been causing permafrost to thaw in many parts of the world; so if it were thawing at Barry Arm that could contribute to the landslide risk. But Dr. Higman said he doubted permafrost played much of a role there.

The violent shaking of an earthquake can cause a slope to collapse, and Alaska is among the most earthquake-prone areas of the planet. Whittier, in fact, was heavily damaged by a tsunami during the 1964 Alaska earthquake, the second most powerful ever recorded.

But gravity can cause a slope to fail as well, especially if it becomes saturated by water during times of heavy rainfall or if a heat wave melts surface snow. In those cases, water can act as a lubricant, making it more likely that land will be pulled downhill by gravity.

Ocean likely to heat up at 7 times its current rate, new study finds

Greenland’s ice losses have septupled and are now in line with its highest sea-level scenario, scientists say